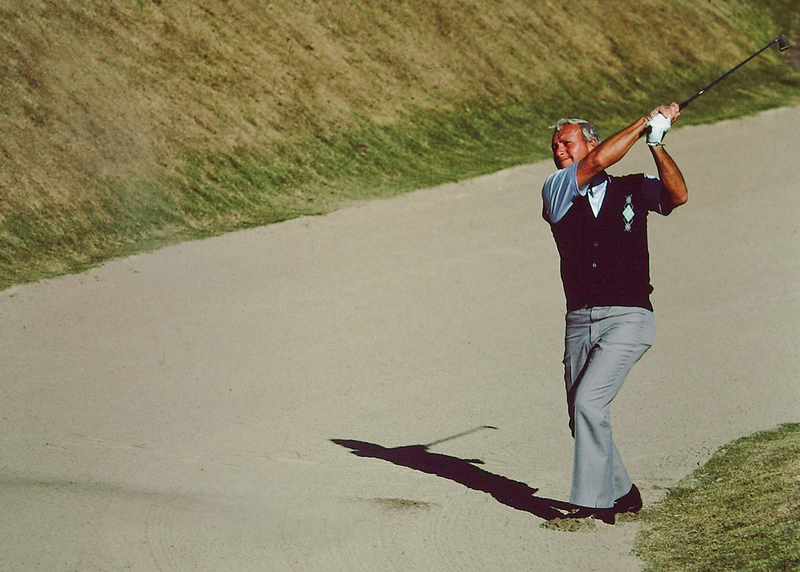 There is only one name that comes to mind when writing our latest instalment of the Legend Series and that is The King, Arnold Palmer.  The word legend can sometimes be overused or referred to somebody in passing; however this cannot be said of Arnold Palmer who really is a true golfing legend.  Arnold was the son of Deacon and Dorris Palmer and was born in the working class steel mill town of Latrobe, Pennsylvania in 1929.  He turned pro in 1954 at the age of 25.

Arnold amassed 62 PGA Tour wins including 7 majors over a career that spanned six decades, finally retiring form competitive golf in 2006.  Arnold had a charisma that is hard to put into words, any fan that went to watch the King felt that a wink or a wave was directed at them personally.

Arnold made a huge contribution to increasing the popularity of golf in the 1950’s that coincided with the golden age of television.  His swashbuckling style and involvement in a number of exciting finishes brought the game of golf to a whole new audience through TV.

Arnold Palmer’s humble background and undoubted talent made him a huge fans favourite, his huge legion of loyal fans became known as Arnie’s Army.  He won the Masters on four occasions (1958, 1960, 1962, 1964), The US Open once (1960) and the British Open twice (1961 & 1962).  Unfortunately he did not quite manage the career slam and missed out on the USPGA, he finished second on no fewer than three occasions.

It’s hard to imagine today but back in the late 50’s and early 60’s few of the top American golfers travelled to play in the British Open for a variety of reasons.  Such as how long it took to travel to Britain, the relatively small prize pots and the style of golf that was played in The Open on the links courses.

However Arnold was keen to emulate Ben Hogan’s achievement of winning the Masters, US Open and British Open in the same year.  Hogan did it in 1953 and Palmer had already won the Masters and US Open in 1960 and wanted to add the British Open.  Unfortunately he lost out to Kel Nagle who beat him by a single shot that year.  Arnold came back and won the following two Opens bringing with him a host of top American golfers and helping turn the Open into the competition that it is today.

Arnold was at his peak between 1960 and 1963 when he won a total of 29 PGA Tour events including five majors.  Arnie played in 50 consecutive Masters making his last competitive appearance in 2004.

As well as his outstanding achievements in golf Arnie developed and grew a diversified golf related business empire.  He would remain a top earner in the rankings long after his playing days were finished.  Arnie was of course a prolific golf course designer and designed over 300 courses worldwide including the Palmer course at the K Club in Ireland where the 2006 Ryder Cup was played.

Arnie contributed to the foundation of the Golf Channel and owned the Bay Hill golf course in Orlando Florida which hosts the Arnold Palmer Invitational a PGA Tour event.  He also purchased and owned his local course at Latrobe where his dad worked as a green keeper.

His contribution to golf is immense and helped take golf into the mainstream.  A true legend.